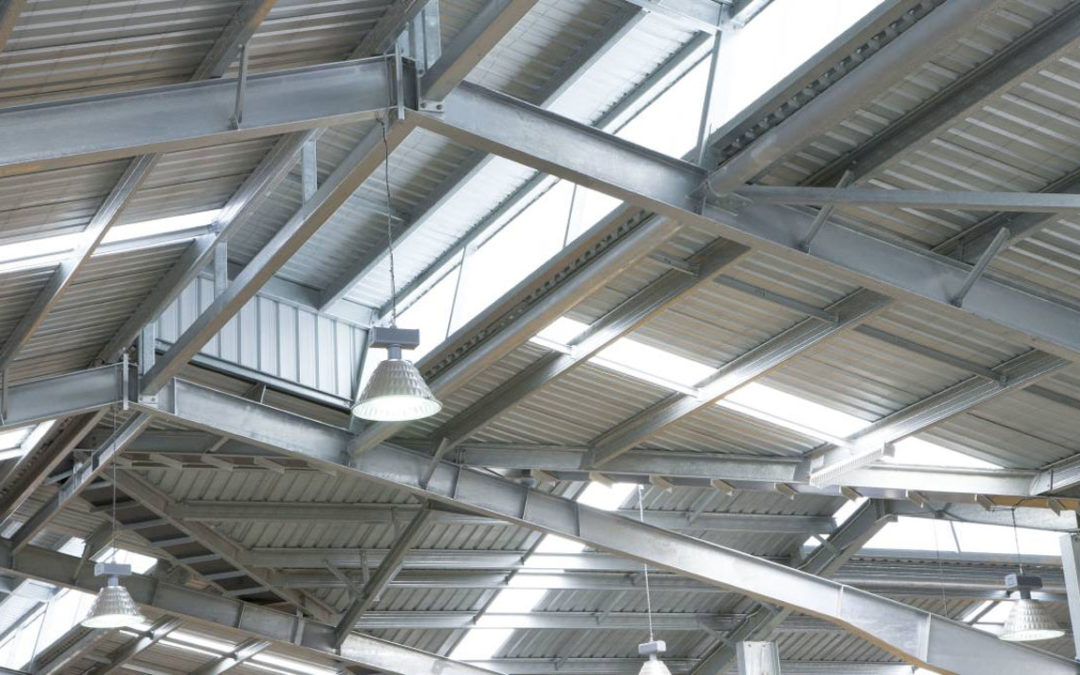 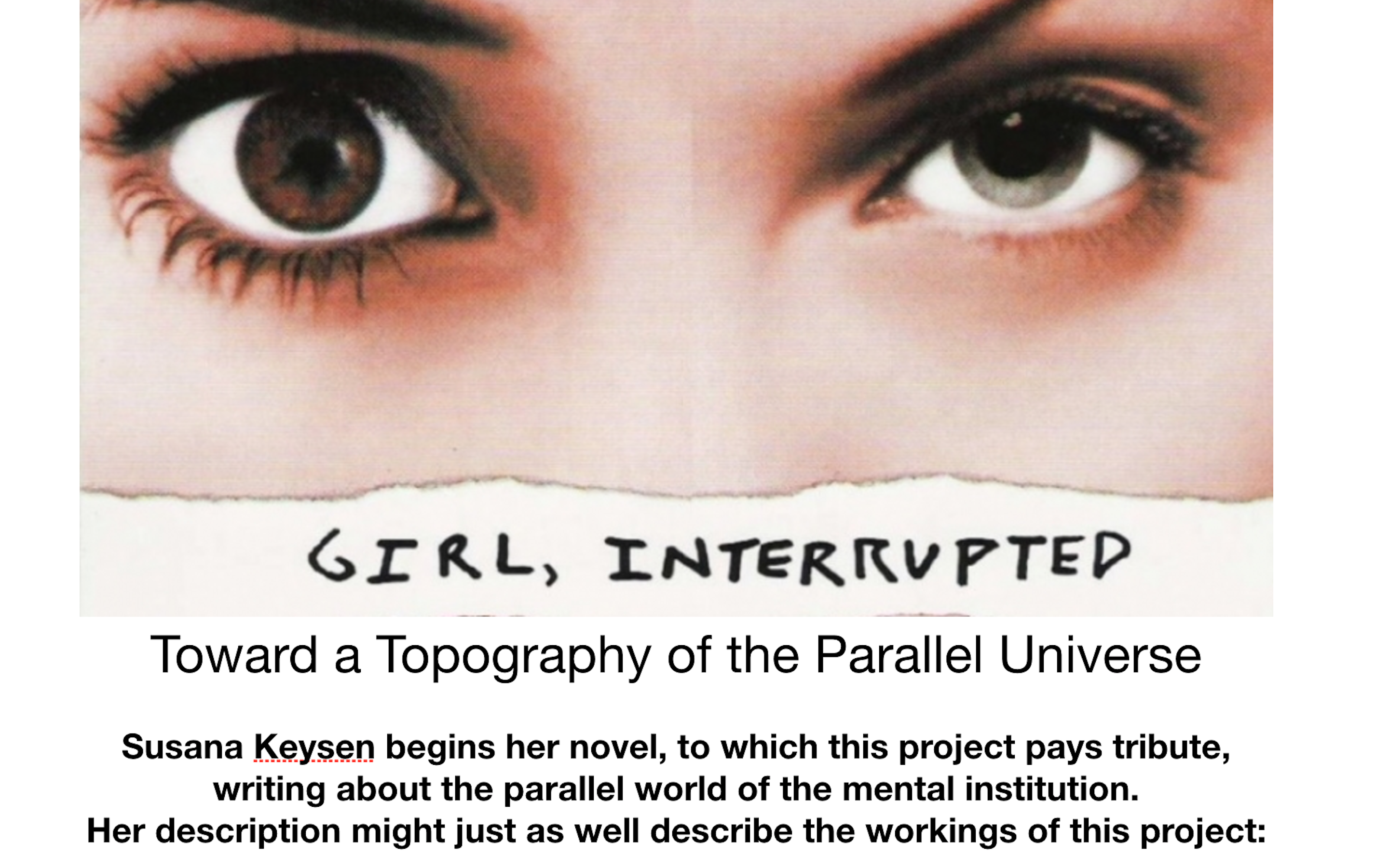 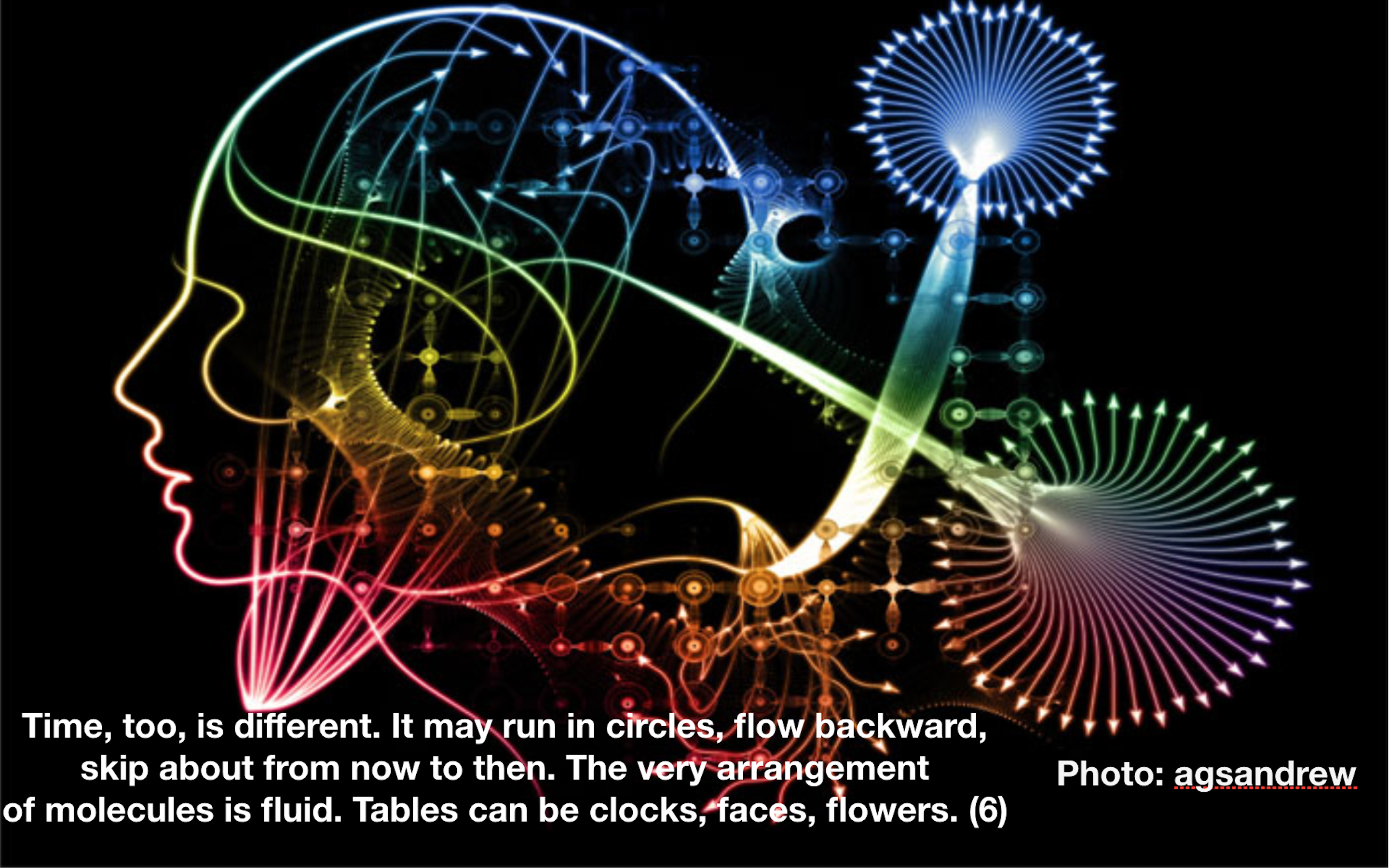 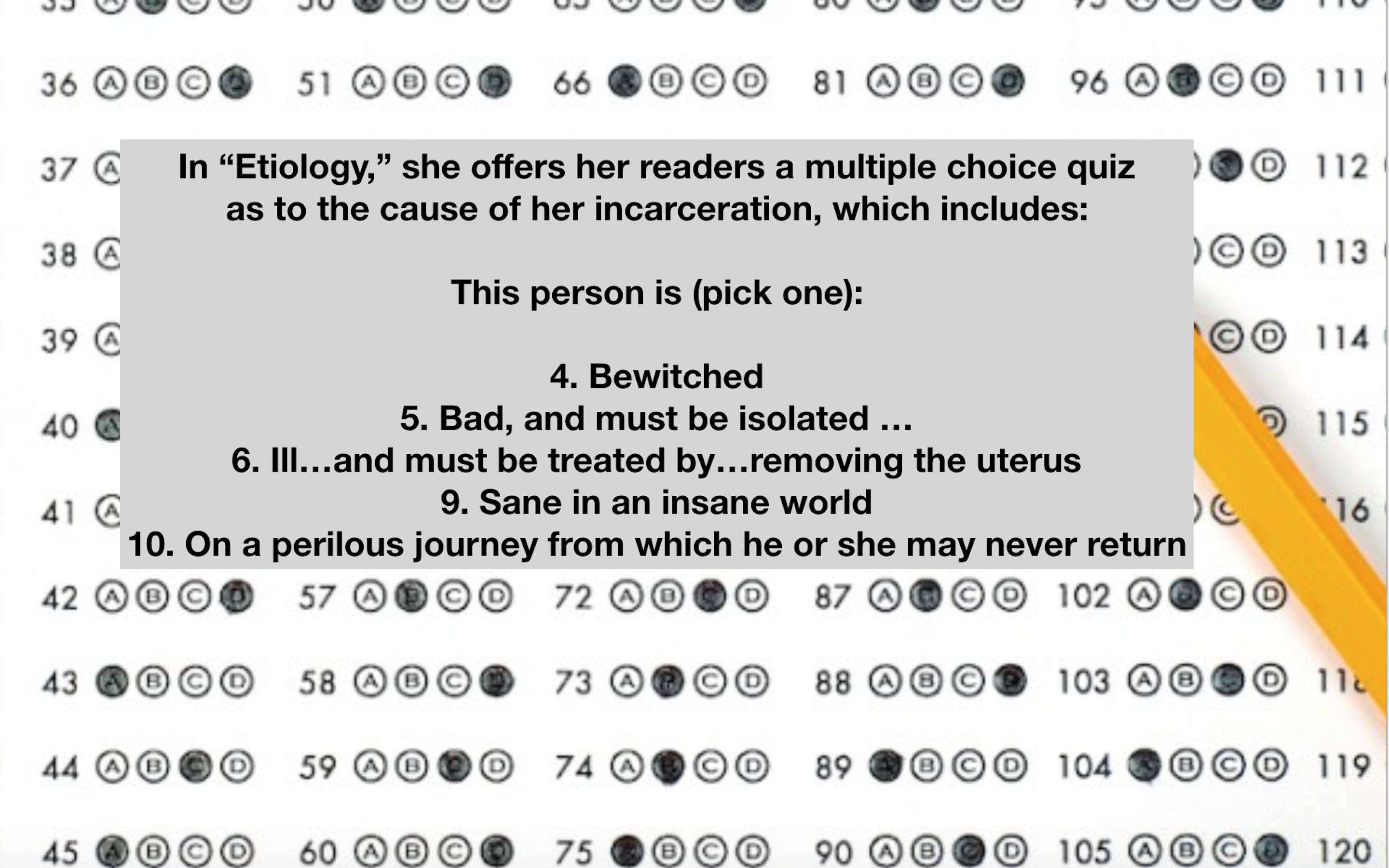 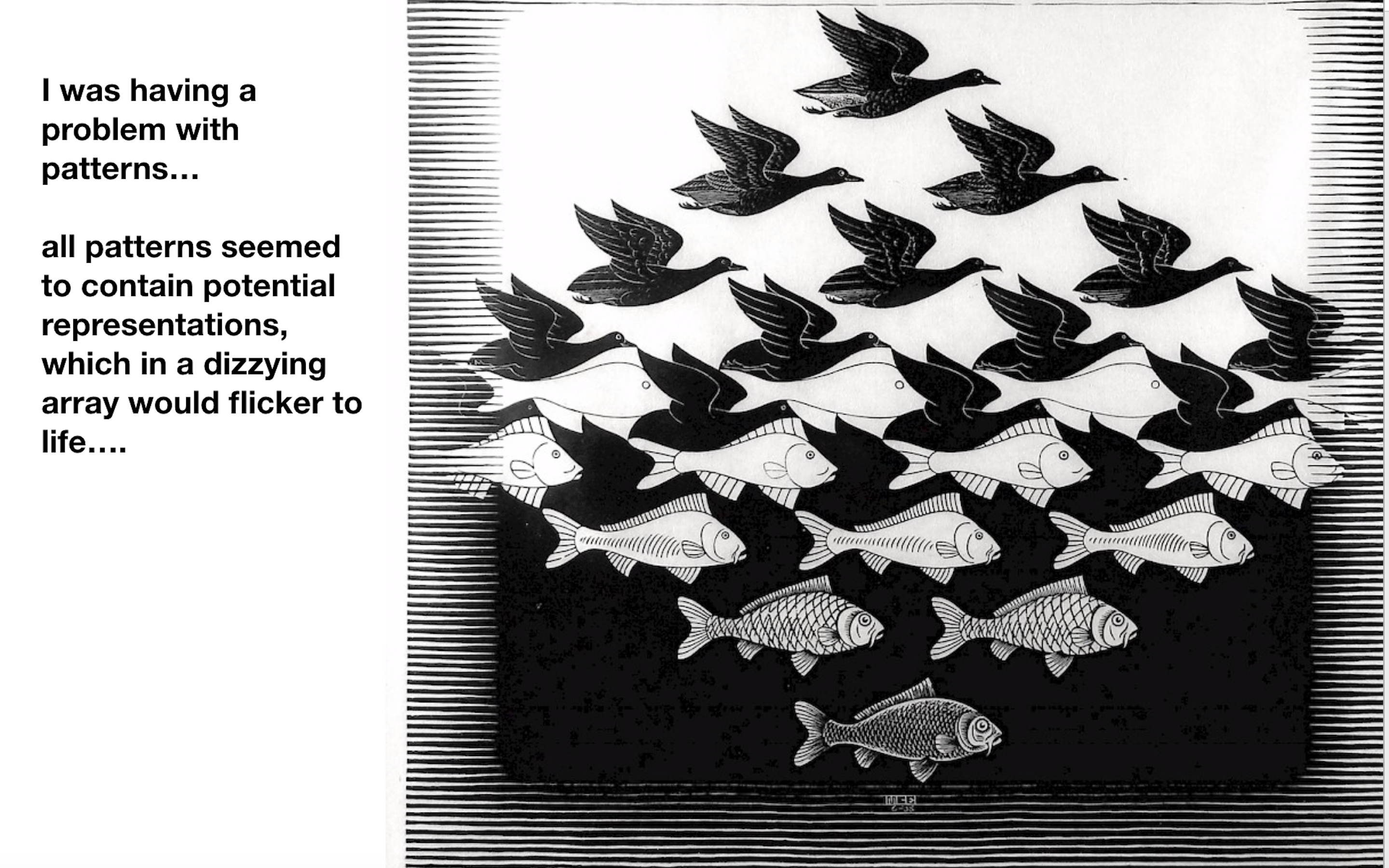 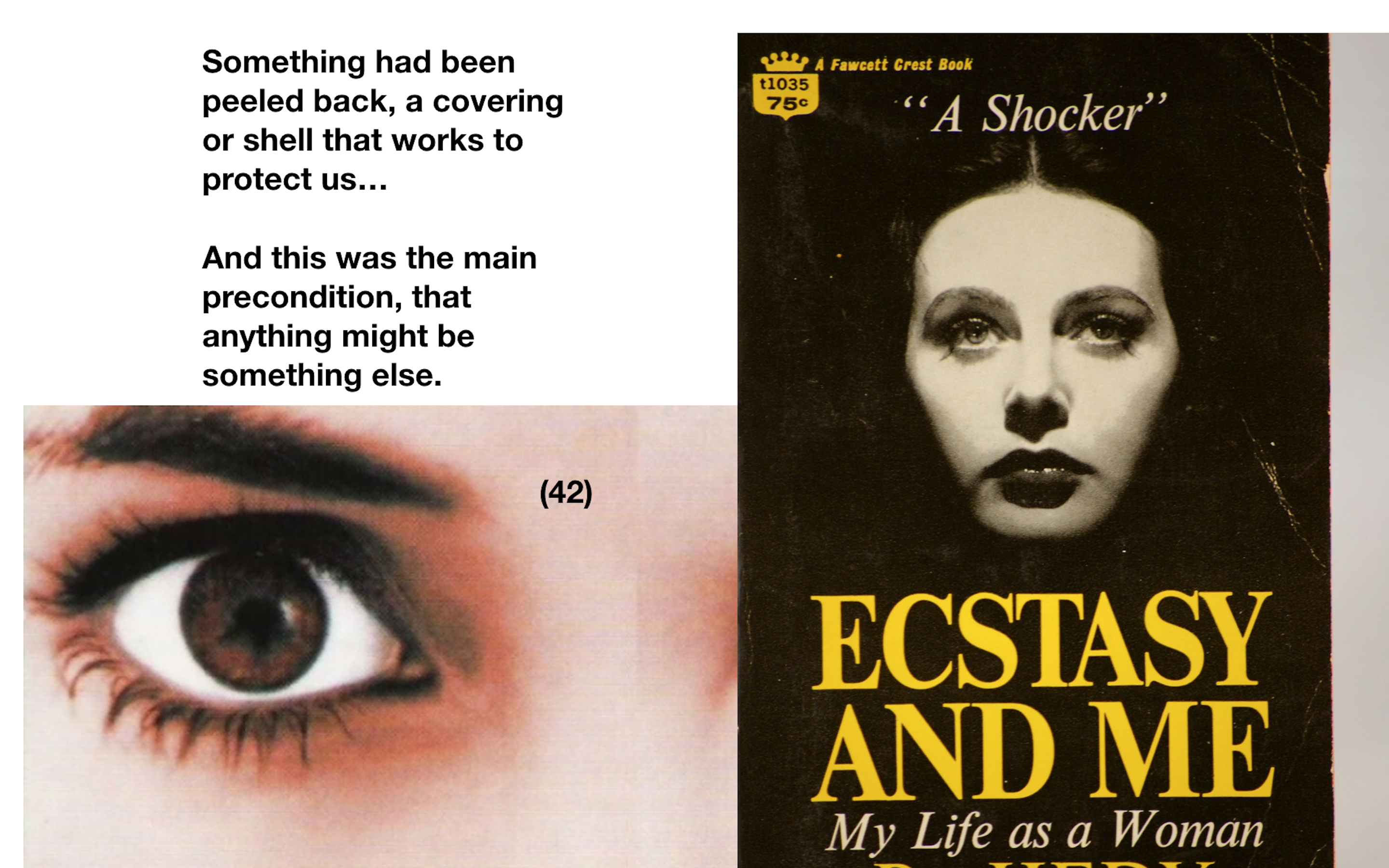 The predominant quality of the slow form is viscosity. Experience is thick. Perceptions are thickened and dulled. Time is slow, dripping slowly through the clogged filter of thickened perception.

…velocity endows every platelet and muscle fiber with a mind of its own, a means of knowing and commenting on its own behavior. There  is too much perception. . ..

an avalanche of prethought thoughts.

Which is worse, overload or underload? 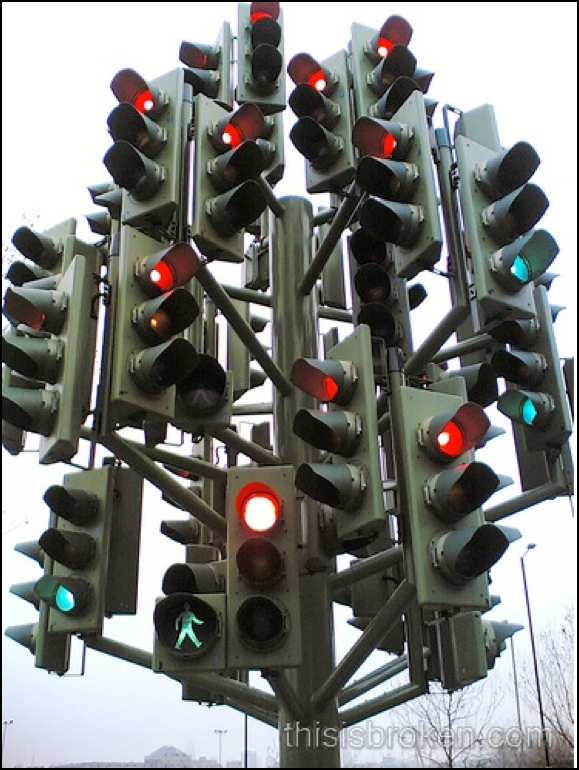 She asked me: “What’s going to happen then, after you’re married?”….

“Nothing,” I said. “It’s quiet. It’s like–I don’t know. It’s like falling off a cliff.” I laughed. “I guess my life will just stop when I get married.” (Girl Interrupted) 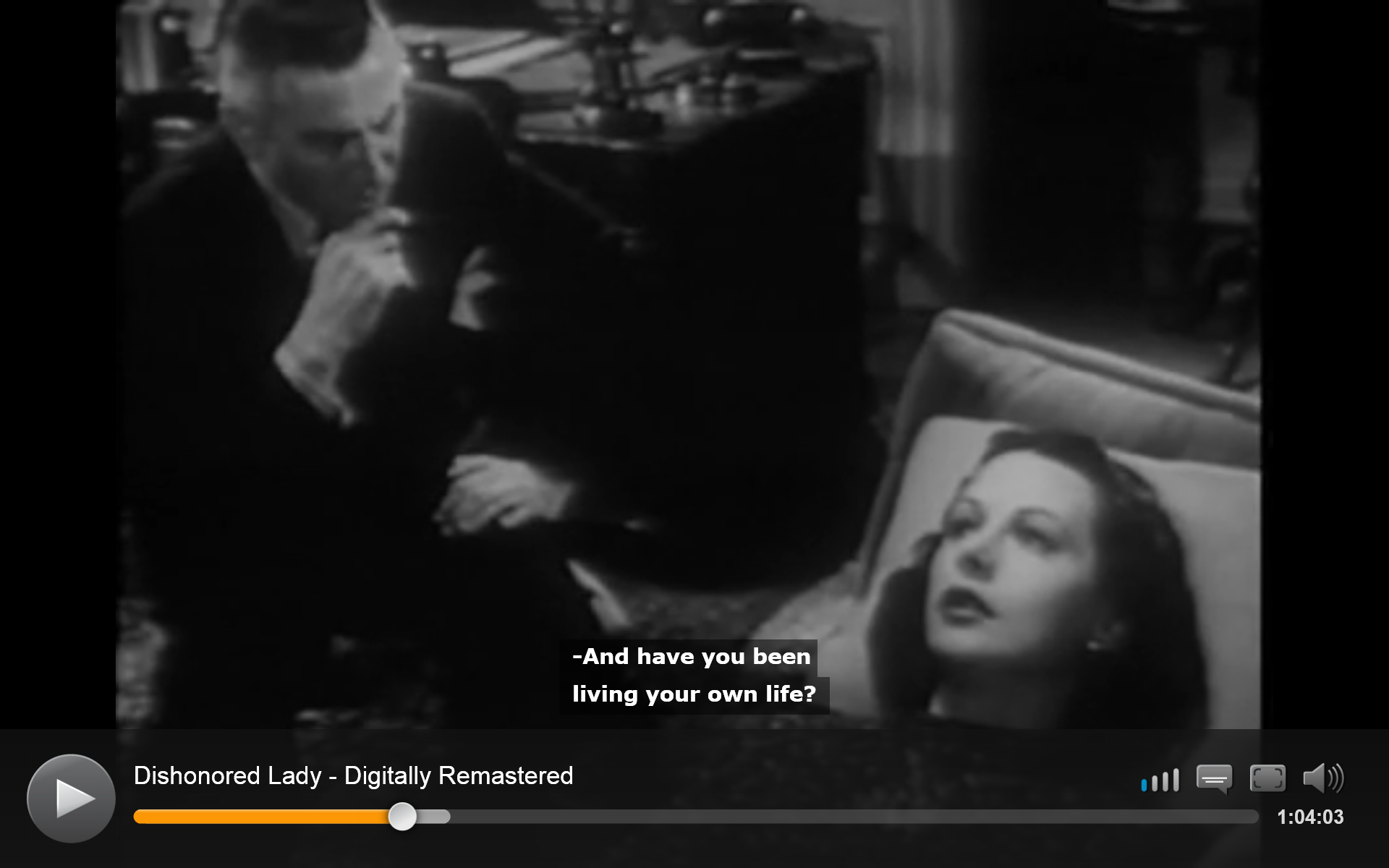 My analyst is dead now….

It calmed me to sit in his office without having to explain myself.

But he couldn’t leave well enough alone. He started asking me, “What are you thinking?”….Then he started to tell me what I might be thinking….

Eventually he said so many wrong things about me that I had to set him right, which was what he’d wanted in the first place. It irritated me that he’d gotten his way. After all, I already knew what I felt, he was the one who didn’t know.   (116-17) 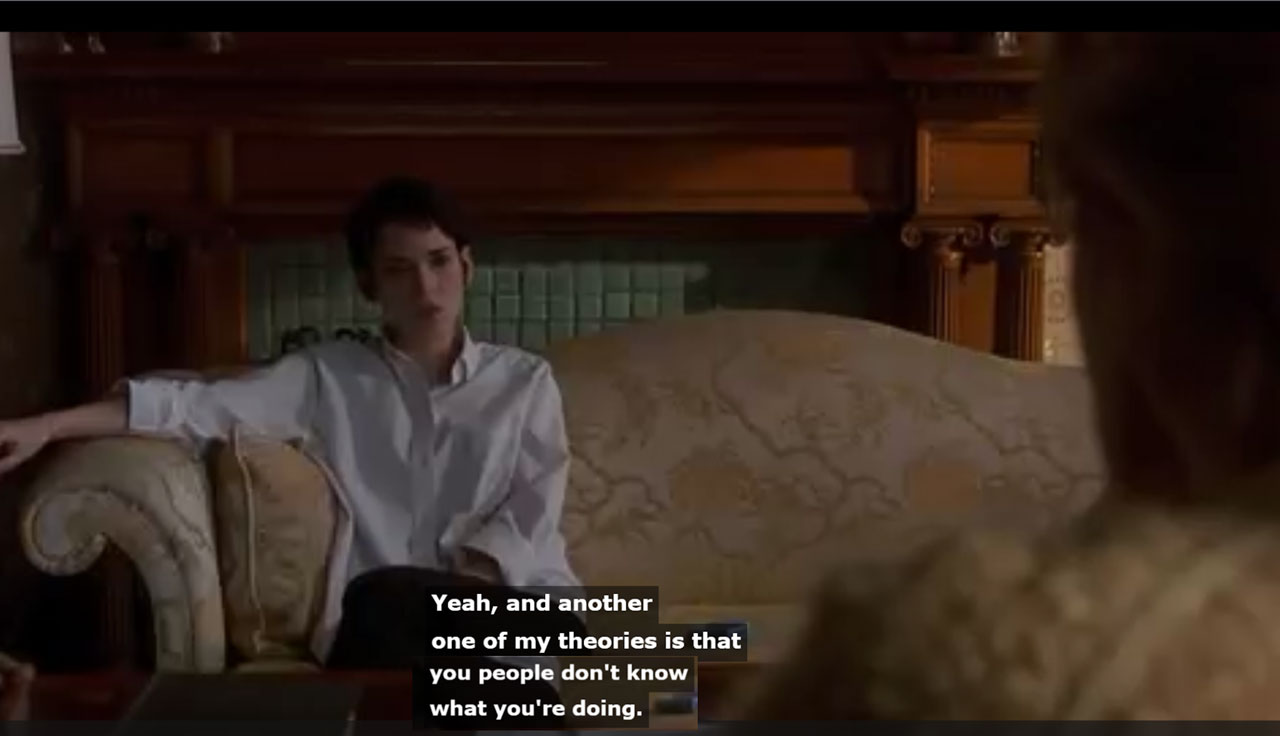 What I discovered about my ailment from the text book:

“An essential feature of this disorder is a pervasive pattern of instability of self-image, interpersonal relationships, and mood…

A marked and persistent identity disturbance is almost invariably present. This is often pervasive, and is manifested by uncertainty about several life issues, such as self-image, sexual orientation, long-term goals or career choice, types of friends or lovers to have, and which values to adopt.”

They tend to be impulsive, particularly in activities that are potentially self-damaging, such as…casual sex…shoplifting… 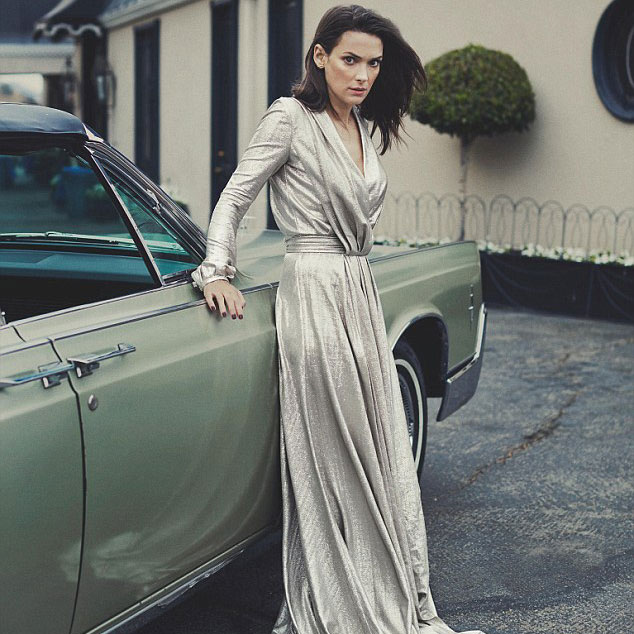 …a fractured but not disassembled psyche… 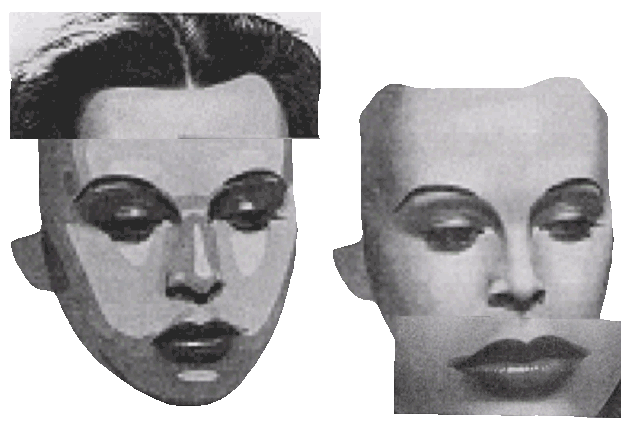 I have a few more annotations to my diagnosis.

“The disorder is more commonly diagnosed in women.”

Note the construction of that sentence. They did not write, “The disorder is more common in women.”

It would still be suspect, but they didn’t even bother trying to cover their tracks. Many disorders, judging by the hospital population, were more commonly diagnosed in women. Take, for example, “compulsive promiscuity.” 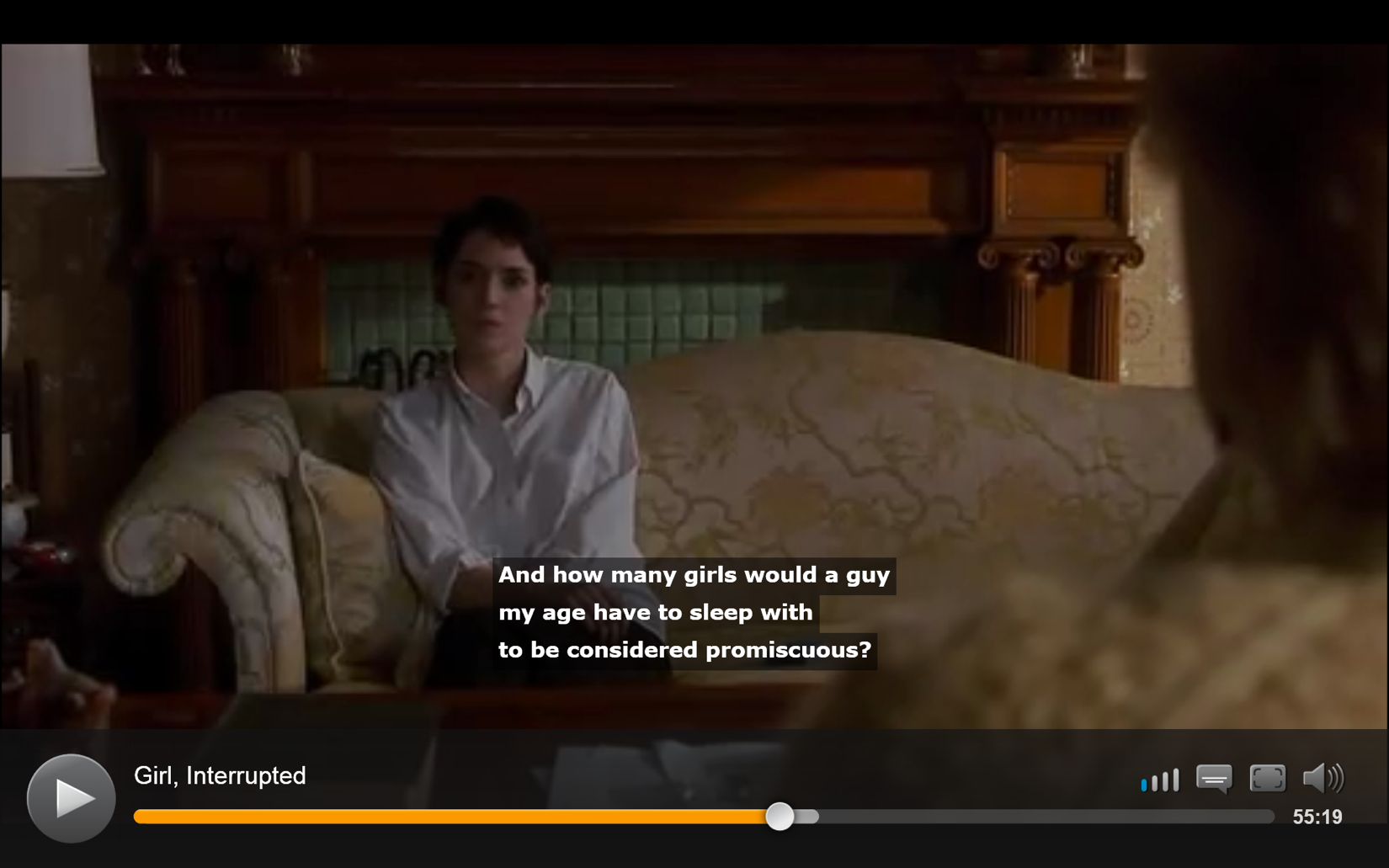 …a fractured but not disassembled psyche…

Whatever we call it–mind, character, soul–we like to think we possess something that is greater than the sum of our neurons and that “animates” us….

Something is interpreting the clatter of neurological activity….

But is this interpreter necessarily metaphysical and unembodied? Isn’t it probably a number–an enormous number–of brain functions working in parallel?

The interpreter is convinced it’s unmappable and invisible. “I’m your mind,” it claims, “You can’t parse me into dendrites and synapses.”

Often, then, it doesn’t know what it’s talking about. And when you decide it’s wrong, who or what is making that decision? A second, superior intepreter? Each interpreter needs a boss to report to.

Suicide is a form of murder–premeditated murder….

The motive is paramount….

Why not kill myself?….The debate was wearing me out. Once you’ve posed that question, it won’t go away. I think many people kill themselves simply to stop the debate whether they will or they won’t. 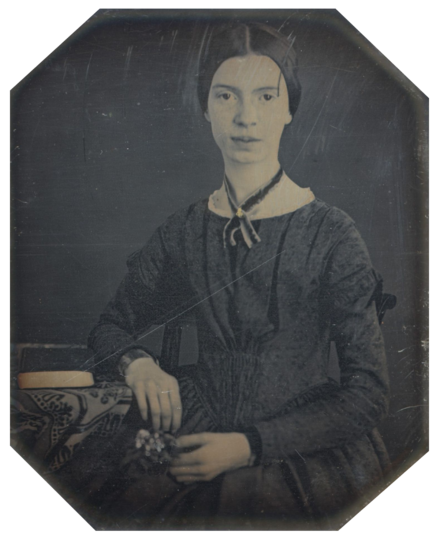 Far safer, of a Midnight Meeting
External Ghost
Than its interior Confronting—
That Cooler Host.

Far safer, through an Abbey gallop,
The Stones a’chase—
Than Unarmed, one’s a’self encounter—
In lonesome Place—
Ourself behind ourself, concealed—
Should startle most—
Assassin hid in our Apartment
Be Horror’s least.
The Body—borrows a Revolver—
He bolts the Door—
O’erlooking a superior spectre—
Or More—
–Emily Dickinson

“The tunnels became my obsession….always hot and clean and yellow and full of promise, always throbbing with heating and water pipes that sang and whistled as they did their work. And everything interconnected, everything going on its own private pathway to wherever it went.
“It’s like being in a map–not reading a map but being inside a map…Like the plan of something rather than the thing itself.”
(Girl, Interrupted, 121)

She might as well have been navigating Warhol’s factory, lost in its Escher-like formations… 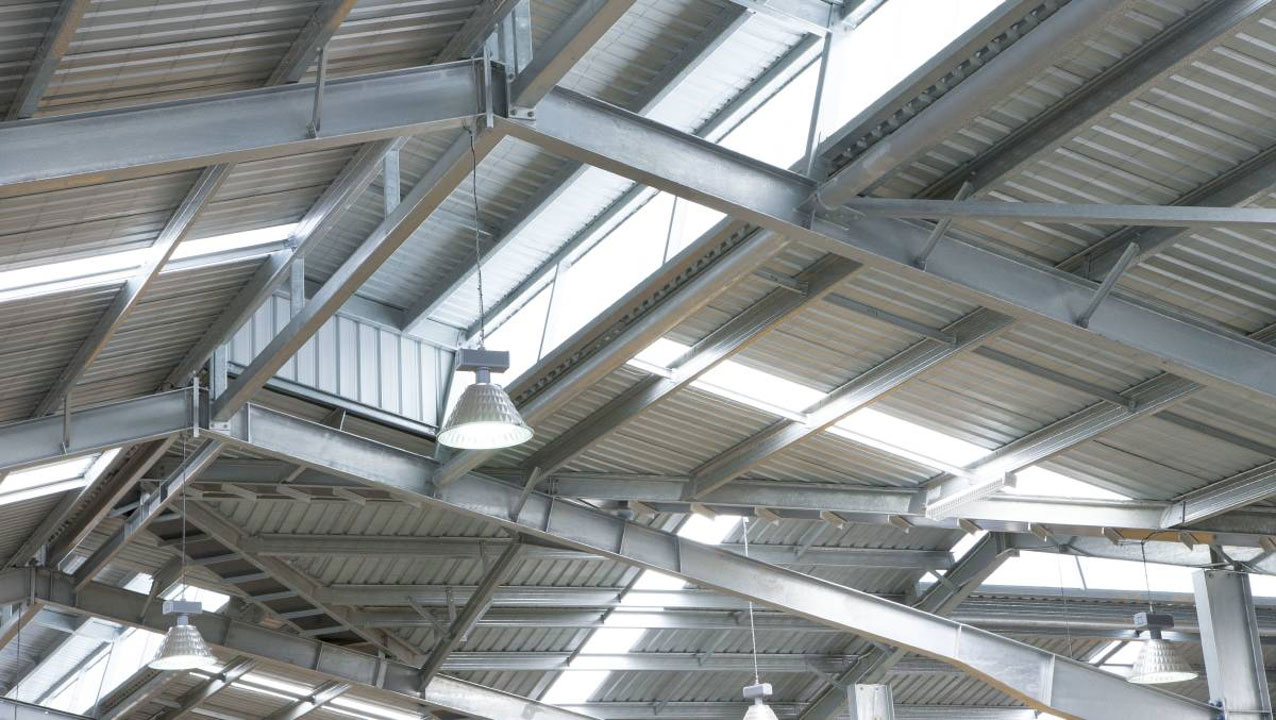 A second visit to the Art Gallery:
“Oh,” I said. “There’s a painting I love here.” 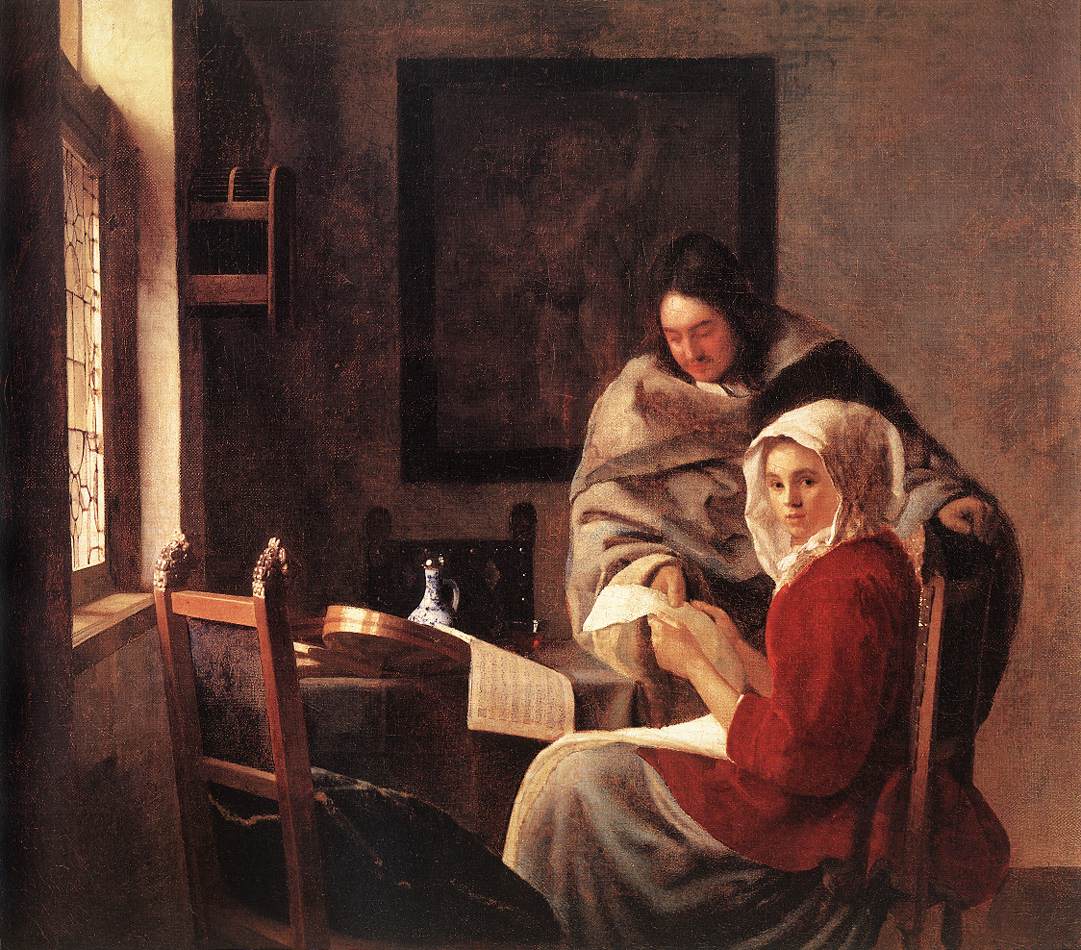 {The girl in the painting] had changed a lot in sixteen years. She was no longer urgent. In fact, she was sad. She was young and distracted, and her teacher was bearing down on her, trying to get her to pay attention. But she was looking out, looking for someone who would see her.

I’ve gone back to the Frick since then to look at her and at the two other Vermeers. Vermeers, after all, are hard to come by, and the one in Boston has been stolen…
(Girl, Interrupted, 167)